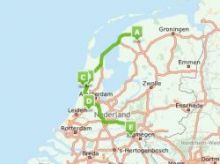 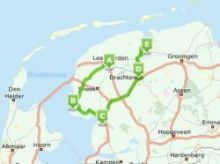 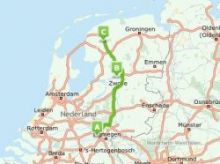 For a visual impression of the post conference tour, please visit the online album.

13.00 h departure, lunch packages were provided in the bus. We traveled Eas along the river Rhine, via Arnhem where we turned North and crossed the Veluwe plateau, a forested area. After crossing the IJssel river via Zwolle we entered a region with lakes and peat soil where the farm of Jeanet Brandsma and Peter Aalberts is located, our first stop. We saw their new cowshed and innovative manure separation system, discussed grazing systems for their large herd, grassland fertilization strategies, cow genetics, and other topics.

We continued North to  Leeuwarden, the capital of the Northern province of Friesland (Fryslân) and to be the European Capital of Culture in the Netherlands in 2018.

After checking in at our hotel, we made a one-hour canal tour and a one-hour guided city walk through the historical town centre and had dinner in our hotel.

Thursday 18 June
We visited the new Dairy Campus centre (part of Wageningen UR Livestock Research) which aims to increase the innovation power of the dairy chain.

Then we traveled South-West to Hindeloopen, one of the 11 Friesian cities. Here we had lunch and the opportunity to explore this charming small ‘town’ and optionally visit the skating museum (you may have heard of Sven Kramer and the famous 11-cities skating tour) and the Hindeloopen museum with characteristic handicrafts, costumes and information about the fishing history of this former sea-side town.

After a half-hour bus ride to the East we arrived in Lemmer around 15 h and visited the Wouda Pumping Station that opened in 1920. This UNESCO monument is the largest steam-pumping station ever built and is still in operation. It represents the high point of the contribution made by Netherlands engineers and architects in protecting their people and land against the natural forces of water. After the guided tour and 3D presentation we continued North-West to reach the lake-side restaurant where we had dinner and met our hosts for the evening. The farmer, Mr. Hessel Agema, successfully combines highly productive dairy cows (12.000 kg milk) with grassland management enhancing high biodiversity forb-rich grasslands and care for meadow birds. In the evening we visited his farm in Kollumerpomp and had a tour around the property.

Friday 19 June
We crossed the 32 km long Afsluitdijk that connects Fryslân to the province of Noord-Holland. This Enclosure Dam was opened in 1932 and separates the Waddenzee, a salt water inlet of the North Sea, from the now fresh water lake of the IJsselmeer. Many innovative projects are currently carried out, such as electricity production from advanced mixing of salt and fresh water (Blue Energy). We stopped at the Monument  In the Wieringermeerpolder, former sea-bottom, land use is shifting from arable farming towards dairying and horticulture; we saw some modern farms. We then visited the famous cheese-market in the historical town square of Alkmaar where cheeses are inspected, tasted, weighed and transported on wooden barrows hanging between 2 cheese carriers.

Around 13.30 we arrived in Egmond aan Zee, a coastal area with sandy dunes, nature areas with grazers and had a view of the North Sea beach during the farewell lunch.

Via the tulip growing region, the tour ended at Schiphol airport.